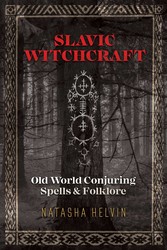 Black Magic of Russia is a fascinating book by Russian witch Natasha Helvin. A matrilineal witch, she descends from a long line of Russian witches. Her book offers an inside look at the secrets of Russian black magic, including practical rituals, the creation of Hell Icons, and the relationship between the demons and humanity. She also discusses the history of black magic in Russia and gives detailed instructions on cemetery magic.

Her heritage is rich with sorcery, and she is an avid student of magical traditions. She learned about sorcery from her grandmother, who possessed a knowledge of ancient Slavic magic. In addition to magical traditions, she is also an expert rootworker and lives in the Pacific Northwest. In the book, she shares more than 300 spells, rituals, and practices that she uses in her daily life.

How to Use Warding Witchcraft Spells to Protect Your Home
The Athame in Wicca
The Witch Crystal Ball on Display at Cornell University
Tags: kratom dangers

A Green Witch’s Guide to Herbs