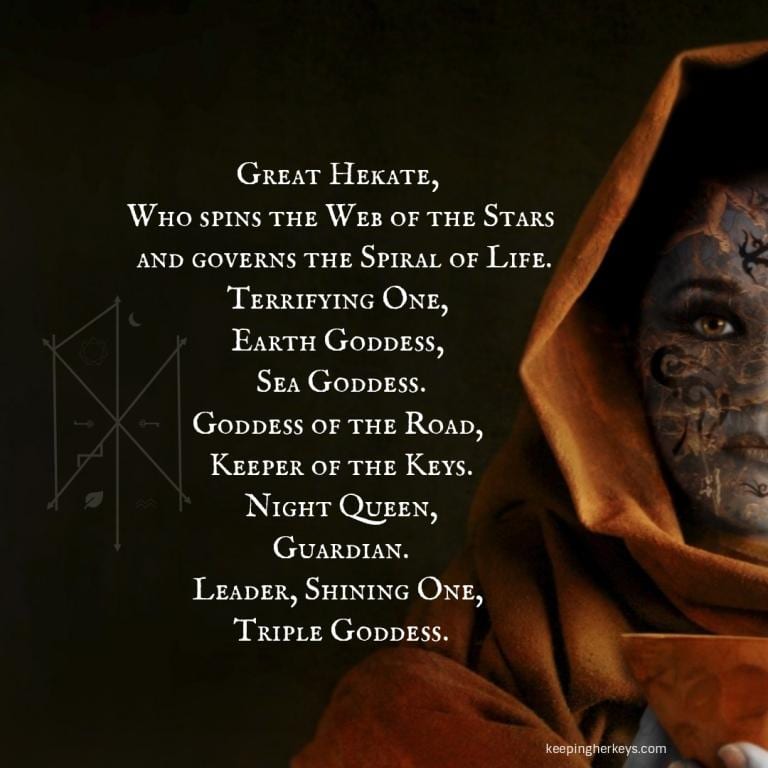 The Goddess Hecate is associated with moon, magic, and liminal space. She is the goddess of gates, thresholds, and hedges. She is also the gatekeeper of the spirit world. In the Greek tradition, she is considered the Crone face of the Triple Goddess. She is often associated with the three other goddesses of the Underworld: Isis, Ereshkigal, and Artemis.

Although Hecate is rarely the center of major myths, her presence is prominent in the tale of Persephone and Hades. Hades had abducted Persephone, and Hecate, who lived in a cave nearby, did not witness the event. As a result, she joins Demeter in her search for her daughter, and the two become close companions. Hecate is a powerful protector of women and has the power to transform people into ghosts.

Hecate is often associated with the night, and darkness. Throughout history, she has been associated with magic and witchcraft. Her attributes include the moon and night. She is the goddess of the underworld and is a symbol of the underworld. Her greatest power is during the time of midnight. She is often depicted with a torches. In ancient Greek myth, Hecate was the goddess of the night, the moon, and witchcraft. In Greek mythology, Hecate was a guardian of the oikos, or entrances.

While Hecate is not one of the most popular of goddesses, she is the most important one in modern-day witchcraft. She is a wise and powerful Goddess, and her wisdom and insight are deep. She does not allow mortals to know her intentions, so working with her requires a lot of caution. You must be careful to gain what you ask for. If you want to become a successful witch, you must follow the rules of the cult and the ancient Greeks.

As the mistress of all spells, Hecate is also a popular goddess in folklore. Her wisdom is so profound that mortals cannot know what she will do. As a Karmic Goddess, she doesn’t let mortals get away with anything. In fact, she will never let anyone do that. In other words, you must be careful with the way you approach her. She will be the guiding force behind your success.

Hecate is a goddess of ghosts and moonlight. Propitiation of Hecate is an early form of black magic. In Shakespeare’s Macbeth, she leads three other witches. Known as the “witch of the underworld,” Hecate is also a goddess of darkness. Whether you are a practicing witch or just a believer, Hecate is a Goddess of ill omens and witchcraft.

The mythology of Hecate includes many stories of her merging with other goddesses. She merged with Selene, a goddess of the sea, and shared a festival with Diana on August 13th in Italy. As a Goddess of the underworld, Hecate is the spirit of the crossroads and is a significant figure in modern Wicca. In fact, her name is Hecate Trivia, meaning “three roads”.

Historically, Hecate has been associated with magic, moon, and night. She was associated with the moon, moonlight, and spells. She was also a goddess of the night and the crossroads, and she was portrayed as a three-headed figure. She was seen as a dangerous force, and her role in the underworld was often viewed as a danger to humans. She was therefore the focus of Christian devotion and worship.

Among the most popular myths about witchcraft is that she is the goddess of magic and spells. During the Dark Ages, she was associated with fire and dogs. Her priestesses were herbalists who studied plants and gathered herbs for medicinal purposes. Hecate is the Queen of Witches and the goddess of magic and witchcraft. She is associated with dragons, snakes, and dogs.