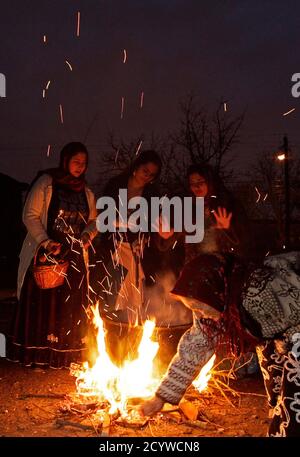 The Rebirth of Romanian Witchcraft

In recent years, the practice of Romanian witchcraft has resurfaced as a popular form of alternative spirituality, and the Romani have not ceased practicing it. Often held in the homes of local people, these rituals last for weeks and are associated with topics such as love, health, money, and politics. The most famous case of this was in the early 2000s, when the Romanian witch Minca, along with nine other European witches, sought to curse corrupt lawmakers in their country. The ritual took place simultaneously in all of their associated countries.

The most famous Romanian witch is Mihaela Minca. For her, being a witch is not a job, but a calling. As a child, she dreamed about being a witch and would often dream about being one. Her mother and grandmother were both witches and were said to have been possessed by the forces of nature for their ability to see things. The most popular rituals in Romania are those of the Siscoi.

During the day, a Romanian witch may perform an actual spell for a client via video call. The spell is a sequence of secret words or phrases that are believed to have magic powers. A successful spell can solve a problem even when spoken by a faraway person. This tradition of practicing Romanian witchcraft has been practiced for centuries, and the popularity of online services has spurred the growth of the local witch community. Today, many of the country’s estimated 4,000 witches are gaining customers from abroad, which means that they can perform a ritual even if they are not physically present.

However, the Romanian witch community, also known as vrajitoare, has taken the practice of Romanian witchcraft to new heights. In the capital city, Romanian witches have recently emerged as a successful post-socialist business. In the countryside, witchcraft remains a very traditional and ancient practice. Professional magicians work in the area of Transylvania, where the traditional practices are still in practice.

Romanian witchcraft is a widely respected and popular form of folk religion in Romania. Despite its resurgence, however, is still a very regulated profession, requiring 16 percent income tax for practitioners. And, the Romanian people who practice witchcraft in the country are very dedicated to the practice. In addition to the stigma, the vrajitoares are devoted to their faith. In turn, this has led to the growing popularity of this type of mysticism in the nation.

In Romania, the vrajitoare community has successfully migrated their ancient practice to the internet. Using social media to broadcast their rituals, they also livestream their rituals and video chat with clients. This self-referential technology has helped the Romanian witch community to grow their business. In the process, they have effectively promoted their witch mysticism and evangelized their beliefs. It is not surprising that the vrajitoares have become increasingly popular on the web.

A Romanian witch who practices Romanian-style voodoo is Mihaela Minca. She claims that being a witch isn’t a job, but rather a calling. She cites her grandmother as a witch, and her mother as a witch. This is also a tradition in her native country. The vrajitoares believe that it is possible to communicate with the gods and use the power of the moon to influence the people around them.

The Romanian witch community is the most famous and influential in Europe. She is considered to be the most powerful witch in the country and her rituals are performed by her coven. In fact, she has been a witch since she was a child and is still practicing. Her mother was a vrajitoare, a Romanian voodoo priestess and a Roma shaman. She is the best-known Romanian voodoo practitioner in the world.

The practice of Romanian witchcraft has been around for centuries. It is a common practice in the country’s countryside, with many Roma women identifying themselves as witches. This practice is a tradition that dates back centuries. For example, it is a common way to get the attention of a potential employer or make a loved one smile. For the most powerful witch, it is a job. In a typical Romani village, however, a ritual is a symbol of power.

How to Pronounce Witch in Irish